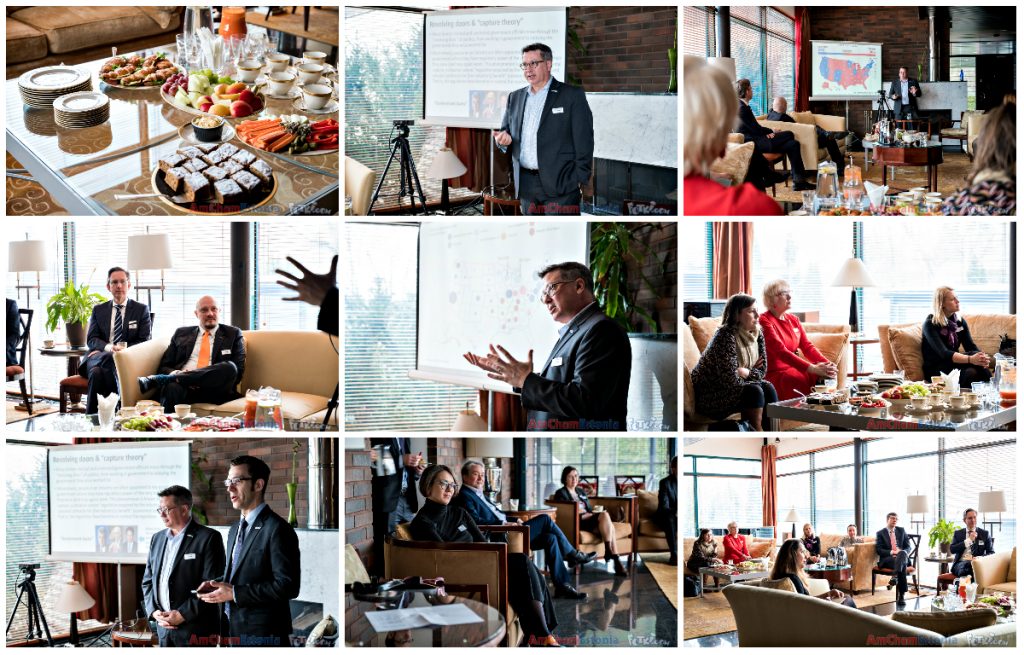 On March 10, U.S. Embassy Tallinn in cooperation with AmCham Estonia hosted a very interesting morning session on the US Elections and Advocacy for the chamber Charter Gold members. The meeting took place at the Ambassador’s residence in Pirita, where invited members got to hear from Dr. Thomas F. Schaller visiting us in Estonia from Washington, DC.

During the coffee meeting we got a full overview of the current situation in the US when incomes to the election year, the election system, polls and trends, as well as effective engagement with policy-makers and how advocacy campaigns are organized in the United States.

Dr. Thomas F. Schaller  is a professor of political science at the University of Maryland, Baltimore County (UMBC). He is author of The Stronghold: How Republicans Captured Congress but Surrendered the White House (Yale, 2015), Whistling Past Dixie: How Democrats Can Win Without the South (2006, Simon & Schuster), and co-author of Devolution and Black State Legislators: Challenges and Choices in the Twenty-First Century(2006, SUNY Press).

In Whistling Past Dixie, Schaller provides a blueprint for a Democratic majority in the 21st century. Published a month before the 2006 midterms, the book’s forecasts were validated by the Democrats’ capture of majorities at every level of government that election cycle thanks in large part to winning 85 percent of all new congressional, gubernatorial and state legislative seats outside the South. In The Stronghold, he argues that Republicans in the post-Clinton era have emerged as a powerful congressional party, but that the party’s Congress-centric politics have damaged Republican competitiveness in presidential elections.

Now in his twenty-first year at UMBC, Schaller, 52, teaches courses in American government, including the U.S. presidency, interest group behavior, and campaigns & elections. A native of Albany, NY, he lives in Washington, DC.