On Tuesday, January 19th, AmCham Charter Gold and Board members gathered at the Private Meeting Room of the Horisont Restaurant, Swissotel Tallinn for a Power Breakfast and ‘Meet and Greet’ the new U.S. Ambassador to Estonia Jim Melville who arrived to Estonia in the beginning of December, 2015.

Ambassador Melville, a career member of the Senior Foreign Service, class of Minister-Counselor was nominated by President Obama as the next U.S. Ambassador to Estonia on May 7, 2015, and confirmed by the Senate on August 5, 2015.  He presented his credentials to President Ilves on December 8, 2015.

Ambassador Melville’s most recent position with the State Department was as the Deputy Chief of Mission in the U.S. Embassy Berlin, Germany.  From 2010 to 2012, he served as Executive Director of the Bureaus of European and Eurasian Affairs and International Organization Affairs.  As Executive Director of EUR and IO, Ambassador Melville directed support for all of EUR and IO’s 79 overseas posts, as well as the domestic requirements for both bureaus.

Prior to that assignment, he served as Minister-Counselor for Management Affairs at Embassy London from 2008 to 2010 and at Embassy Moscow from 2005 to 2008.  In Moscow, London and particularly in Berlin, Ambassador Melville frequently served as Chargé d’Affaires, a.i.  Ambassador Melville’s first Foreign Service assignment was in the U.S. Embassy to the German Democratic Republic from 1986-1988. He has also served in Seychelles, St. Petersburg, at the U.S. Mission to NATO, and in Paris.  In Washington, he has worked in Legislative Affairs, as a Senior Watch Officer in the Operations Center, and at the Foreign Service Board of Examiners.

During the meeting, all AmCham Charter Gold members had a chance to introduce themselves and also present the main business issues that they face in their everyday business here in Estonia. At the meeting, Ambassador Melville has also been invited by AmCham President Andrus Alber to accept the position of the Honorary President of AmCham Estonia to which Ambassador Melville has responded positively and accepted the position.

Later in the winter season, we plan to invite Ambassador Melville to meet the wider AmCham membership and discuss such important topics as security in the region, transatlantic cooperation and TTIP, etc.

Our sincere gratitude goes to Bart Westerhout and Swissotel Tallinn for hosting this important meeting and for the delicious breakfast as well as excellent atmosphere. 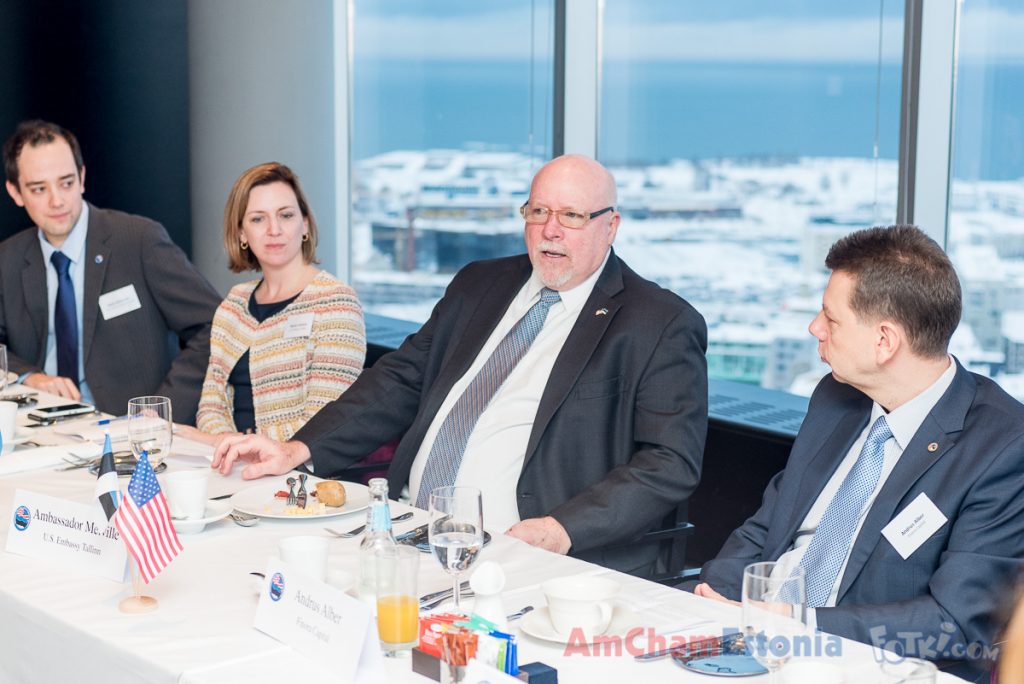